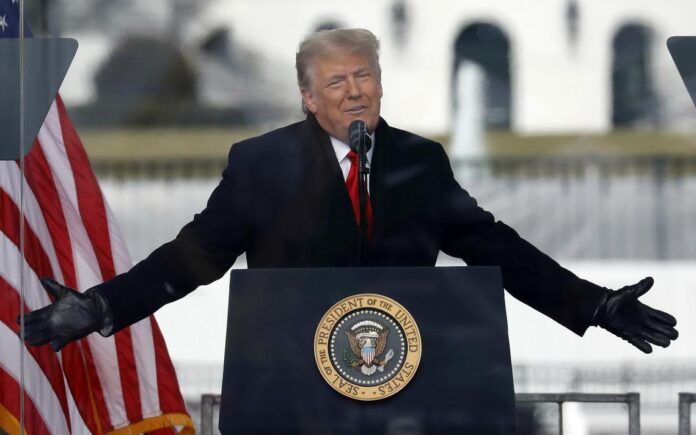 Since the events of January 6, 2021 in Washington D.C. we have been bombarded with the narrative that President Trump incited the violence at the Capitol with his speech that he gave outside of the White House earlier that day. Virtually every news source has jumped on the band wagon that President Trump is personally responsible for the actions taken by the protestors, and therefore he needs to be held accountable. Law makers from both sides of the isle have seemingly found common ground in these accusations against Donald Trump. Representative Liz Cheney (R-WY) declared that there was “no question that the president formed the mob, the president incited the mob, the president addressed the mob. He lit the flame.” In the same manner as the left, let’s break down the congresswoman’s statement and either confirm or disprove the validity of her claims.

The first claim that Rep. Cheney stated was that President Trump “formed the mob”. According to ABC news the permit for the “Save America” rally was issued on January 4th after being filed for by “Women for America First” Executive Director Kylie Jane Kremer. In the social media advertising for the rally it was not confirmed that President Trump would even be speaking at the event until the day before. Therefore Rep. Cheney’s first claim is blatantly false.

“We did not organize, operate or finance this event. No campaign staff was involved in the organization or operation of this event. If any former employees or independent contractors for the campaign worked on this event, they did not do so at the direction of the Trump campaign.”

The second claim Rep. Cheney made is the same claim that has been echoed throughout social and news media since the events of January 6, is that “the president incited the mob, the president addressed the mob. He lit the flame.” We can see this same allegation cast by USA today in their article Whatever legal or constitutional test you apply, Trump incited the violent Capitol attack. However, upon a detailed look at their claims and “quotes” and comparing them with what President Trump actually said we can see the depth of their manipulation.

When it comes to making people believe a lie the oldest trick in the book is telling partial truths, or manipulating the truth so that it promotes your narrative. The oldest example of this can be found in the book of Genesis when Satan, in the form of a serpent, convinces Eve to eat of the forbidden fruit. The author of this article in USA Today uses the same tactic by cutting up President Trump’s speech, and picking and choosing lines from throughout the hour long speech; therefore, the author manipulated his words to match her claims.

In the screen shot above you can see one of the so called “quotes” of the President, but when you watch or read the speech yourself you can easily see the manipulation of his words. The first line she quoted “After this, we’re going to walk down, and I’ll be there with you….” was made roughly sixteen minutes into the speech. The full statement can be seen below.

President Trump speaks clearly of peacefully “cheering on” the senators and congressmen who were planning to object to the elector certification because of the massive voter fraud. Further down in the “quote” from USA Today, they write, “We’re going to walk down Pennsylvania Ave…” the full quotation from the President can be seen below:

In Trump’s usual manner he jumped around, and interrupted his own comments, but the overall statement was that he and the crowd would walk down to the Capital to encourage the congressmen and senators who were planning to stand up and object to the elector certification. No where did the President call for any forms of violence. In fact he stated multiple times that the crowd was there to peacefully make their voices heard.

“I know that everyone here will soon be marching over to the Capitol building to peacefully and patriotically make your voices heard.”

If the speech itself is not enough evidence that the President in no way called for or incited violence, the timeline of events without a doubt absolves President Trump. He took the stage just before noon that day and spoke for roughly an hour and fifteen minutes with his speech ending at 1:10pm. The violence between protesters and police began at 1:11pm. How could a crowd at the White House, 1.6 miles away from the Capitol, arrived in one minute? In order for this to be possible the crowd would have had to travel at a speed of 96mph. Due to the size of the crowd, the walk took upwards of 45 minutes, it is impossible that the crowd fighting with police at the Capitol was the same crowd the President supposedly incited.

If the speech itself, and the timeline of events are not enough, the reports now are that the attack on the White House were planned weeks in advance, and that the Capitol Police, FBI, and the Department of Homeland Security were all aware of the threats ahead of January 6.

Now more than ever before, it is of vital importance that we are paying attention to what is going on around us. We live in a world where we are bombarded with information on TV, on news media, and on social media. It is imperative that we research for ourselves and seek out the truth, lest we be manipulated by partial truths, or even bold face lies. You can find President Trump’s entire speech here. Don’t take my word for it, read or watch the speech for yourself and then you decide if President Trump incited “insurrection” or not.

“And ye shall know the truth, and the truth shall make you free” John 8:32