Sons of Issachar
Home Spiritual What Is An Evangelist? And Why Your Church Needs One.
Facebook
Twitter
Linkedin
Email
Print 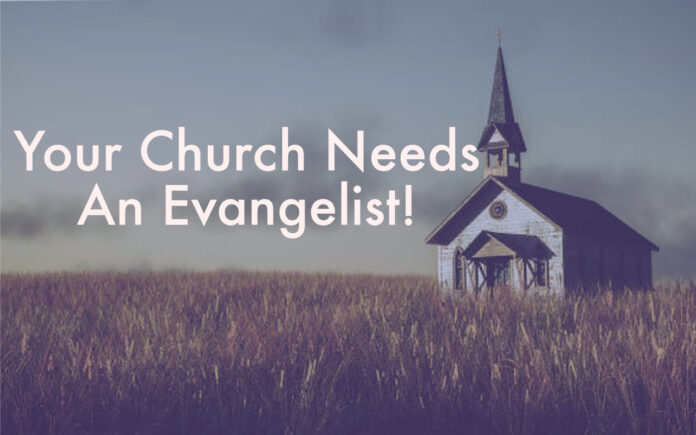 Evangelism is a term used quite often in the church in regards to corporate and individual outreach, and soul winning, however the office of an evangelist has gone to the way side. The main focus of the church in recent history has been that of world wide missions. Each year churches in the United States sends out millions of dollars around the globe and tens of thousands of missionaries in the name of perusing the great commission and reaching the “uttermost parts of the earth”. According to Reuters in 2010 the the United States lead the world in sending missionaries out to other countries sending out 127,000 men and women across the world. While of course this is wonderful and indeed adhering to the Great Commission, in our effort to reach the world to Christ we have in many areas neglected the lost people in our own nation, and even in our own communities.

“And Jesus came and spake unto them saying, All power is given unto me in heaven and earth. Go ye therefore, and teach all nations, baptizing them in the name of the father, and of the son, and of the holy ghost: Teaching them to observe all things whatsoever I have commanded you: and, lo, I am with you alway, even unto the end of the world. Amen.”

One of the last instructions given to the apostles, before Jesus returned to right hand of the Father was given in Acts chapter 1. Jesus instructed the apostles and by extension you and I to be witnesses for Him in “Jerusalem, Judaea, and in Samaria, and unto the uttermost parts of the earth”. In this statement we see Jesus gives us specific instructions on where we are to preach the gospel. Jerusalem was the city in which the apostles were, this is pretty clear to interpret, we are to reach the people in the city around us, Judaea was the territory, or for us to better understand it is the state in which they were. Samaria was a neighboring state in the same nation, and uttermost parts of the earth is obviously the rest of the world. Let me break it down for like this, I am commanded to be a witness for Christ in Dayton, Ohio, Kentucky, and the rest of the world. This passage is often used in relation to world wide missions, and rightly so, however in the churches push to reach the world with the gospel we have overlooked people in our own communities and surrounding areas.

“But ye shall receive power, after that the Holy Ghost is come upon you: and ye shall be witnesses unto me both in Jerusalem, and in all Judaea, and in Samaria, and unto the uttermost part of the earth”

What is an Evangelist?

Enter the role of an evangelist. What is an evangelist you may ask? An evangelist is a specific role laid out in scripture, by the apostle Paul, as a separate role from a pastor. A evangelist is a preacher with a special gifting by God to reach the lost and revitalize believer’s burdens for lost souls. They are men called, and enabled by God to bring to the forefront the condition of man. They have a special gift to bring lost souls to the realization of their need for Christ as well as remind Christians of the obligation they have to reach the lost. We can see the power of this role in the first and second Great Awakenings. Evangelist George Whitefield, Jonathan Edwards, and Charles Finley are great example we can look back on to see the effectiveness of evangelist on local churches, and the lost world.

Quite often in churches Christians get bogged down with routine, they come to church and do the same thing week in and week out. Church members serve in the same ministries, listen to the same pastor, and follow the same regiment on a weekly basis. While constancy in the Christian walk is vital, it can also lead us into complacency without us realizing it. So often Christians and churches get engrained in their routines and in that they can loose focus on the main objective. Churches across America have unintentionally transitioned from outreach, to inreach. In our desire to do the works of the church in decency and in order they become insensitive to lost souls in the world around them. This is the reason churches need evangelist! Evangelist are often blunt, they may preach hard on sin, but most importantly they convey the state of lost souls in a different yet very effective way. When a evangelist comes to a church the Lord uses them to energize believers in spreading the gospel. They may say the same message that the pastor preaches but the Lord enables evangelist to penetrate the hearts of believers in a different way that jolts faithful members and reawakens their burden for lost souls. More then ever before churches across America need evangelist! As we draw closer to the Lords return Christians need to be reminded of the eternal separation from God that lost souls face, an eternity of pain and suffering in hell, and believers need to be embolden to share the gospel aggressively with a lost world. This is why the Lord gave the church evangelist, they were intended to be a gift to the church, for edification and encouragement. Does your church need an evangelist? The answer is YES!

Unchanging Hope in a Everchanging Time