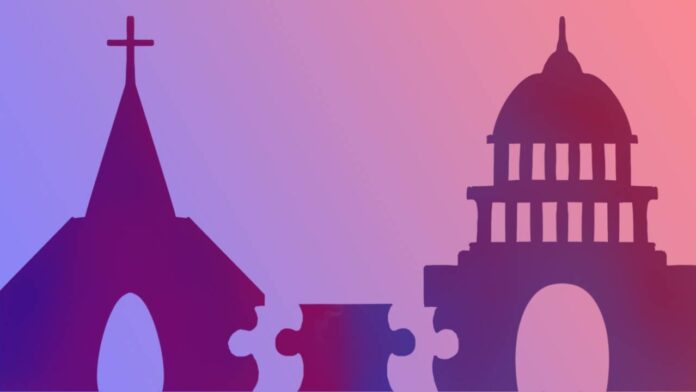 In todays society there is a statement you will hear people, from all types of worldviews and backgrounds, agree on and that is “Politics and religion do not mix”. There are a few different thoughts can we can derive from such a statement. First, is that politics, therefore governments, have no authority over religious organizations, their beliefs, and their customs. Secondly is that religious organizations should not comment or be involved in the political process. A third conclusion is that a person can be involved in religion or politics, but not in both. While the first statement is true, the latter two are far from the truth. The truth of Scripture and history is that Christians, were meant to be on the forefront of political discussions and leadership, not sitting complacently while the lost world dictates policy.

Where Is Separation of Church & State Found?

“Congress shall make no law respecting an establishment of religion, or prohibiting the free exercise thereof; or abridging the freedom of speech, or of the press; or the right of the people peaceably to assemble, and to petition the Government for a redress of grievances.”

1st Amendment to the Constitution of the United States of America

The most common basis for the separation of church and state can be found in the United States Constitution. Sadly, the majority of people misinterpret the First Amendment. The premise for the amendment was to prevent the federal government from mandating a state religion, as was the pattern of governments from the dawn of time, but overtime people have grown to add the interpretation that the church is to stay separate from the government and political issues. This belief could not be further from the truth of Gods Word.

Human Government Is Ordained By God

In Scripture the first instance we can see of God ordaining government is when God commanded Noah to enforce the death penalty, which would have required a form of human government.

“Whoso sheddeth man’s blood, by man shall his blood be shed: for in the image of God made he man.” Genesis 9:6

This sentence of death required a government system to enforce the new law that God had ordained. We can further see from Scripture that government was ordained to be God’s instrument for justice on earth.

“For rulers are not a terror to good works, but to the evil. Wilt thou then not be afraid of the power? do that which is good, and thou shalt have praise of the same: For he is the minister of God to thee for good. But if thou do that which is evil, be afraid; for he beareth not the sword in vain: for he is the minister of God, a revenger to execute wrath upon him that doeth evil.” Romans 13:3-4

Before Israel became a Kingdom they ruled as a theocracy governed by the prophets and judges that were directly picked and appointed by God. Some examples of these are:

God Used Men of God To Advise and Instruct Kings/Rulers

After the 12 judges of Israel the people wanted a physical leader in the form of a king. God hand picked the first king of Israel, Saul, and later David. Throughout their reigns (and later kings) the primary advisors to the kings were the sons of Issachar and the prophets of God. The children of God had direct roles in the human government and guided the nation in God’s ways. In the same fashion as Romans 13:3-4, “for rulers are not a terror to good works, but to the evil.” God, through the prophets, utilized the Kings of Israel to exterminate the workers of evil.

“Samuel also said unto Saul, The Lord sent me to anoint thee to be king over his people, over Israel: now therefore hearken thou unto the voice of the words of the Lord. Thus saith the Lord of hosts, I remember that which Amalek did to Israel, how he laid wait for him in the way when he came up from Egypt. Now go and smite Amalek, and utterly destroy all that they have, and spare them not; but slay both man and woman, infant and suckling, ox and sheep, camel and ass.” 1 Samuel 15:1-3

We can also see that in the New Testament the Lord sent men to preach to the kings and rulers of their day. John the Baptist, in Matthew 14, confronted Herod about his violation of God’s law. Likewise, there are multiple account of the apostle Paul preaching to the governors and rulers of pagan Rome. One popular example is Paul’s sermon to King Agrippa found in Acts 29. These men not only preached on the rulers’ sin and of their need for repentance, they also rebuked their policies that conflicted with God’s word. Contrary to these clear examples laced throughout Scripture modern Christianity treats politics and leaders as a necessary evil, and that they should not engage in the political process.

In today’s society Christianity has taken a drastically different stance on politics than that of Old Testament prophets and early church leaders. Pastors and church members today veer away from political topics and go so far as to condemn political speech in the church. Some Christians go so far as to avoid voting in elections and they sit completely on the sideline. They have taken the idea of “Separation of Church and State” well beyond what it was designed to be and have left the state and governing to the world. Due to this absence of Bible believing leaders in the political world we have seen the decline of morals as a nation. One of the most blatant examples of our nations moral decline can be seen in the 1973 Supreme Courts decision on Roe vs. Wade. Other blatant examples of the moral decline can be seen in issues such as the LGBTQ issues, unbridled spending, the decline of the education system, and even foreign policy. Christians’ lackadaisical attitude toward politics is in direct contrast to the pattern established throughout the Scriptures.

Christians Should Be Active & Involved

As Bible believing Christians we shouldn’t just avoid the political area, but rather we should be actively involved in the process in a variety of ways. The first and most obvious way we need to be involved is in our prayer life. How often do we sit back and complain about our leaders and their decisions without ever lifting them up in prayer? Prayer is one of the easiest things we can do as Christians. It is the most powerful tool at our disposal, and yet it is the least utilized. Prayer can do anything God can do, and God can do anything!

“I exhort therefore, that, first of all, supplications, prayers intercessions, and giving of thanks be made for all men; For kings, and for all that are in authority; that we may lead a quiet and peaceable life in all godliness and honesty” 1 Timothy 2:1-2

Another way Christians can be active in the political arena is to be well informed. The old saying says that “ignorance is bliss” but I would argue that ignorance is either laziness or carelessness, both of which are sin. Through the diligent study of God’s word we know that we were created for work, and to be active in our families, churches, and communities. Ignorance of what is going on around us is dereliction of our duty. Proverbs tells us that the heart of the discerning acquires knowledge, and the ears of the wise seek it out. Beyond being knowledgeable about current issues and events we should be vigorous in affecting change. If we look to the Old Testament we see countless examples of the men of God calling out kings and leaders for their sin, and advising them on the way to move forward. One clear example is in 2 Samuel chapter 12 when the prophet Nathan confronts king David about his sin. Now, in the United States of America, it easier than ever before to address our leaders. Congressman and Senators have offices around their districts with staff at the phones taking calls and emails from the people they represent. Biblically it is not just a recommendation to Christians, but rather it is our responsibility to hold our leaders accountable, and to advise on right and wrong doing. Finally, the most obvious way Christians can be involved is for them to run for public office. Some how Bible believers have come to the conclusion that we are to be separate from politics, much less run for office. They view it as all politicians are corrupt and to be successful you must be willing to sacrifice your own morals. This couldn’t be farther from the truth. God not only ordained human government but in Scripture he hand picked leaders that honored him. We are in a spiritual war, and yet Christians are willing to let lost men and women lead other lost people. We are the light of the world, who better to help lead in the dark times in which we live?

“Ye are the light of the world. A city that is set on an hill cannot be hid. Neither do men light a candle. and put it under a bushel, but on a candlestick; and it giveth light unto all that are in the house. Let your light so shine before men, that they may see your good works, and glorify your father which is in heaven.”

Today, more than ever before, we need Christian men and women who are knowledgeable about the issues of today and who are active in the fight for what is right. We need men and women who will get on their knees before almighty God and spend time in prayer for our leaders and those in authority. Furthermore, we need men and women who will step up and be a voice for what is right, calling and emailing our representatives to affect change in our nation. Above all, we need godly men and women to to be shining lights in our communities and to be leaders both as citizens and as elected officials. We were not created to sit by and watch as the world crumbles morally around us, but rather we are called to be ambassadors for Christ, a light in dark world, a city on a hill.

Unchanging Hope in a Everchanging Time